Aly & AJ have been one of the most enduring groups to come out of 2000s Disney Channel. Today, they have tons of newer music, they’re touring, they’re creating art to reflect who they are now. But in 2006, they were fresh off their debut album, Into the Rush, and Aly’s show with Raviv Ullman, Phil of the Future, would come to an end. The sisters were a valued and beloved part of the Radio Disney/Disney Channel circle, so Cow Belles was a smart move on Disney’s part. 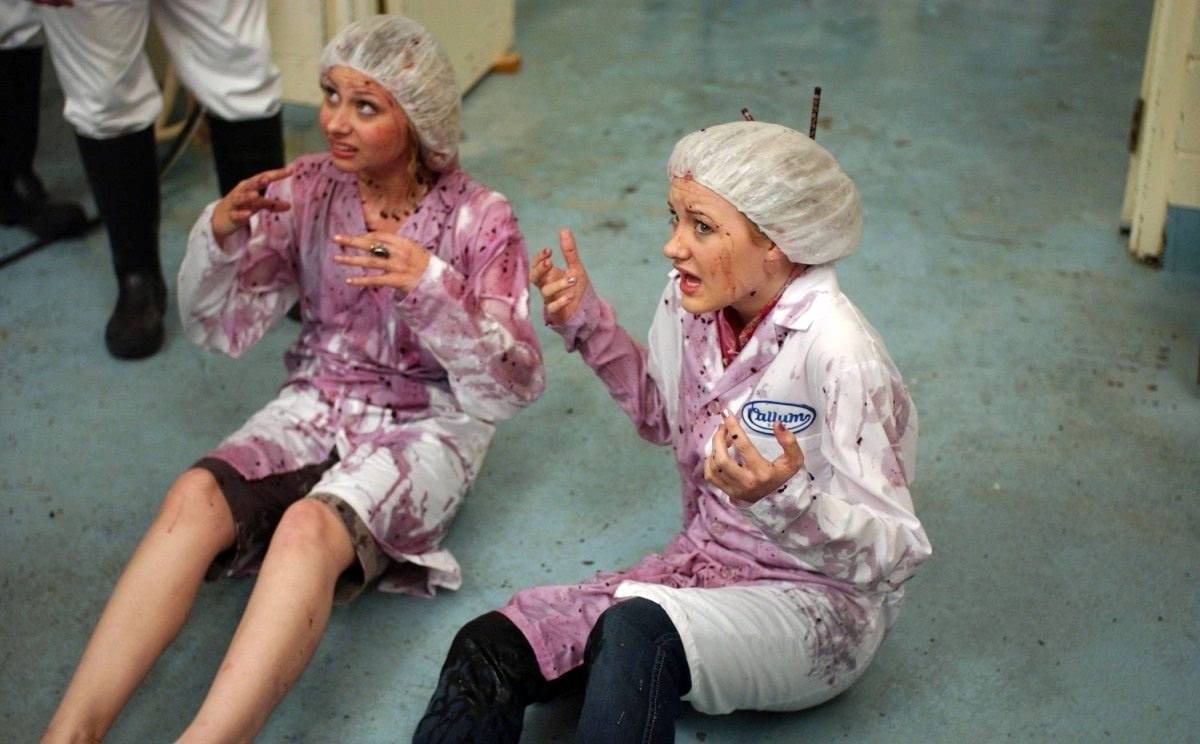 I could wax philosophic about the riches-to-rags trope (or compare this movie to the Duff sisters’ Material Girls, like I’ve done before), but what I’d like to highlight is the fact that this movie still rocks. In case you’ve never seen it, here’s a quick rundown: Wealthy older sister Taylor Callum (Aly) inadvertently drowns her hot driving teacher’s truck in a pond. She and younger sis Courtney (AJ) accidentally burn their kitchen when they hastily leave for a shopping trip. Their dad, the head of a dairy corporation, lowers the boom and forces them to work all summer while he goes on a butterfly expedition. Said expedition was arranged by dad’s begrudging business partner, who steals all the company’s money. Taylor and Courtney become working girls, out on the assembly line every day, and Taylor decides to step up and help the dairy pay its workers following the stolen money incident. This means that she must use the $25,000 set aside for her sister’s cotillion. Courtney is initially furious, but she decides that helping people is more important than a country club party. Taylor needs more money for the dairy workers’ paychecks, so she then sells her car (that belonged to her now-deceased mother).

I can’t relate to the thousands of dollars in cotillion money, but I’m honestly not sure I’d be willing to sell my car (especially if I didn’t live in a very walkable city). But the point is, these teenagers learn to become selfless and show kindness when it is most needed. Whatever you think about that, you can’t deny the adorable relationship blossoming between Taylor and Jackson, the guy whose truck she totaled. One of their kisses is interrupted by the Callums’ housekeeper, but I suppose the channel had to leave some room for Jesus. They still have their other moment out in the field after Taylor helps with the birthing of a calf.

We get so many golden, laugh-out-loud bits in this film, and I continually find joy in it. There’s this French exchange student, Philippe, that Courtney has the hots for. He’s supposed to be her cotillion date. In one scene, they’re talking on the phone while Philippe is doing bicep curls, and it just makes me giggle with glee. The two are meant to have a spotlight dance at the big party, but of course, Courtney’s money has gone to the dairy employees. They rally together to celebrate making it through tough times.

The Callum sisters’ generosity doesn’t solve everything… including a little spoilt milk. Luckily, their dad comes home from butterfly hunting and persuades the country club people to help the dairy remake all their products. A little far-fetched, maybe. But still a cute ending. I’d like to believe people would leave a party to help community members. I was in middle school when the movie debuted, and it made a big impression on me. My sister and I would watch it frequently, and we got to rewatch it together recently with our mom. This charming film includes the Aly & AJ classic “On the Ride,” from their first album. Cow Belles was directed by Francine McDougall and written by Stu Krieger and Matt Dearborn. Watch it for heartfelt delight!