Spies, directed by Kevin Connor, is one of the more obscure Disney Channel Premiere Films. I’m fortunate to have found it anywhere (even if it is YouTube) and think it is an interesting example of the historical fiction that landed somewhere between the true stories and the literary adaptations the channel made during this time.

The year is 1942. Shiloh Strong plays Harry Prescott, a 12-year-old who lives with his father and sister. Harry’s brother Tom was killed while in the service, specifically in the attack on Pearl Harbor. The Prescott family is hosting a brother and sister, Ned and Flo, evacuees of the London air raids who lost their home in a bombing. Flo is nonverbal and will not eat until the Prescotts provide her with bangers and mash. Ned, however, is very talkative and is interested in his new surroundings.

Harry begins to believe that several locals are German spies, and he is right about two of his suspects. He and Ned initially fight but then become close and work together to solve their mystery. Radio frequencies, suspicious boot footprints on the beach, and peculiar behaviors betray some of the culprits. Harry’s math tutor and her husband (Mr. and Mrs. Mills) are up to something, so Harry and Ned sneak into their home, match the boots with the footprint on the beach, and set out to uncover the spies. But in a near-fatal final act, the boys discover that their housekeeper, Mrs. Beale (Cloris Leachman), is in cahoots with the Millses. All three of the adults are plotting to assassinate President Roosevelt.

Mrs. Beale sets the boys up, sending them to the Mills residence for Harry’s math lesson. He’s instructed to start working before Mrs. Mills arrives. Of course, Ned and Harry use the time to find the villains’ lair — complete with the most ominous organ, a radio transmitter, maps, and more. Flo sneaks into the house behind her brother and Harry, hiding in a closet as Mr. and Mrs. Mills return home. The couple and Mrs. Beale ascend to the lair, tie up Harry and Ned, and set a bomb to go off in ten minutes. It’s up to Flo to save the boys — she frees them with only moments to spare. But then, Harry and Ned must go save President Roosevelt, so Flo agrees to tell Harry’s family what has happened.

The last action scene of the film takes place at the Brooklyn Navy Yard, where Roosevelt is making a speech. The Millses and Mrs. Beale are high up in the crow’s nest with their gun. Mrs. Mills is ready to shoot, but Harry and Ned stop her in her tracks, with Harry’s family arriving just in time. (She actually almost shoots the president, but she loses her footing, falls, and drops her gun.) President Roosevelt is safe, and he makes a special phone call to Harry Prescott, to express his appreciation for the boys saving his life.

After spending my entire childhood and teen years watching Rider Strong in Boy Meets World reruns, it was great to discover that Shiloh led a Disney Channel movie once upon a time. He later directed his brother in many episodes of Girl Meets World, bringing him back to the channel. Shiloh Strong and the other child actors gave great performances in this film, and it was also nice to see the older sister develop a relationship with a young man in the service, who is planning to transfer. I’ve found a couple of Disney Channel promo video for Spies, but the only poster art I can find is one advertising the film dubbed in Spanish. Anyway, let me know if you decide to watch this one (or if you need help finding it). 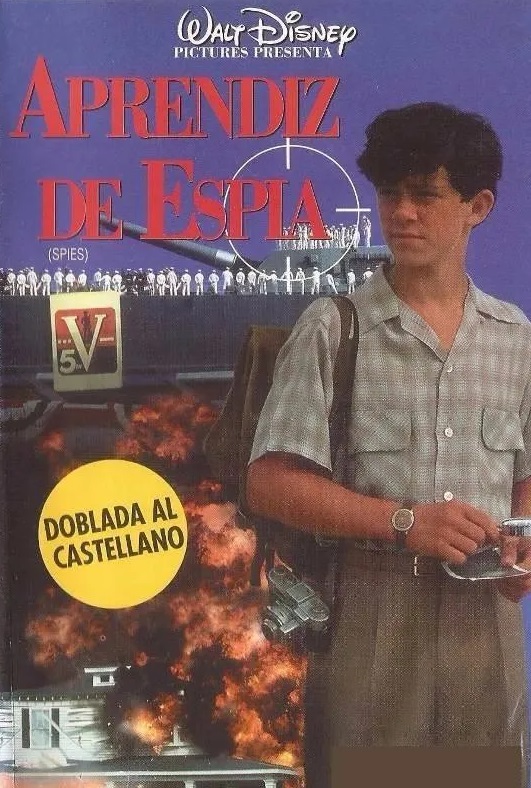