Per my DCOM anniversary date order, I had to watch Zombies 2 before the original Zombies, but it actually worked out well! Seeing the werewolves in the second movie made me want to revisit how it all started. I had seen both of these movies once before watching them this week. Directed by Paul Hoen, the first two movies will soon be joined by a highly-anticipated third installment. In the first film, humans and zombies are interacting socially for the first time. In the second film, werewolves are introduced into the dynamic. The third movie will show us what happens when aliens descend on Seabrook, the franchise’s primary setting.

At the start, we get a brief origin story on the zombies. You have to suspend your disbelief a little to accept that lime soda was involved, but anyway, we have zombies now. In the modern day, they wear “Z-bands” to contain their zombieness so that they don’t eat any real brains. Meanwhile, the humans are obsessed with cheerleading and looking perfect (their perception of perfect, anyway). I love what The DCOM Commitment wrote in their review about the movie’s colors: “I have never seen any movie or TV show adhere to a color scheme like the neon pink-and-green combo of Zombies.” The color scheme is so important in this film. The pink and green aesthetic is striking, and I think it’s meant to be a bit unsettling. In both the zombie neighborhood and the human neighborhood, there’s a bit of a stark, 1984 feel… It’s interesting once they throw in the richer colors of the werewolves (pictured below) in the second movie. 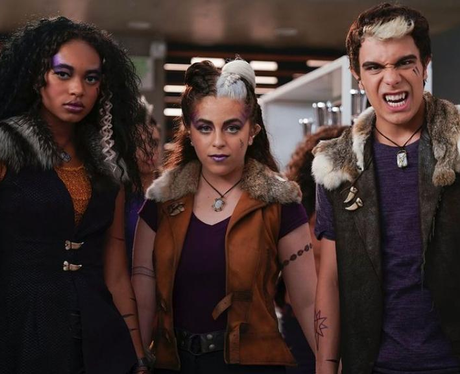 These movies exist in a world that we don’t know, but they deal with serious issues real-life humans have experienced, namely, discrimination. When the zombies integrate with the humans at high school, zombies are forbidden to partake in any after-school activities. They must take all their classes in the basement, with the janitor as their only teacher. Zed, the lead zombie (Milo Manheim), starts to change the rules when he gets a spot on the football team. In the second movie, the zombies and the werewolves aren’t allowed to attend the school dance. In both films, Addison, the lead human (Meg Donnelly), tries to advocate for the zombies, but she eventually wonders if she might actually be a werewolf. The second film sees her trying out life with the wolf pack, eventually discovering that she is not one of them. Throughout it all, Addison and Zed have feelings for each other and are trying to find a way to be together without interference. Bucky the cheerleader is disgruntled because a zombie once bit his grandfather. Meanwhile, Eliza is upset by the mistreatment zombies have historically experienced at the hands of humans. There are certainly moments where everyone finds commonalities. But as soon as the humans and zombies come together, there always seems to be something to drive them apart.

I think you can interpret the story itself in different ways, and the third movie will likely contribute to the established themes (I perceive) of equality and acceptance. The music (by George S. Clinton and Amit May Cohen) adds a lot to the narrative, with memorable songs between Zed and Addison — they sing of their relationship, “Someday, this could be ordinary” — and songs that apply to whole groups. I love the werewolves’ “We Own the Night” and “Call to the Wild.” Check out the zombies! This could have been a Disney Channel sitcom called “Zombies and Cheerleaders,” but I think it works well as a soon-to-be-complete trilogy.