If I have to tell you just one favorite DCOM, I’m going to say Double Teamed. I’ll also say, I can’t believe this movie is 20 years old! Sometimes I blink and I can imagine it’s 2002 again. I was in second grade at the time, and I thought basketball was pretty cool. 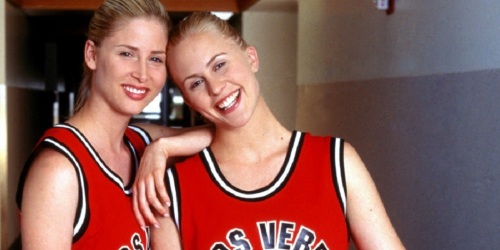 Double Teamed was written by Douglas Penn and John Wierick and directed by Duwayne Dunham. It debuted at the end of the Zoog Disney era, a beautiful time for DCOMs. The film was preceded by Twas the Night and followed by Cadet Kelly.

This story is set in California in the 1980s and is based on the real lives of Heather and Heidi Burge, twins who eventually play in the WNBA. At the start of the film, they’re high school students who play volleyball at a small private Christian school. While at volleyball practice, some random guy convinces their dad to move them to a bigger school so that a scout will see them play volleyball.

Heather is played by Poppi Monroe; Heidi is played by Annie McElwain—not related in real life! Their parents, Larry and Mary Burge, are played by Nick Searcy and Mackenzie Phillips, respectively. Phillips was also known as the mom on Disney Channel’s So Weird (1999-2001) at the time.

Larry tells Mary that scholarships will be necessary for the twins to attend college (since Larry decided to not take the big lawyer position because he wanted to be home with the family). Heidi and Heather respond differently to their dad when he breaks the news that they’re switching schools. Heather goes along with it, but Heidi expresses her frustration much more.

Palos Verdes High School surprises both twins. Heidi joins the drama club, and Heather stumbles into the women’s basketball team practice. The coach is astounded by her height (she and Heidi are around 6 feet tall) and convinces Heather to try out for the team. What was supposed to be a warmup for volleyball season instead becomes an obsession for Larry Burge. He forces Heidi to try out, too, and she’s furious, understandably.

This movie is everything I want in a Disney Channel Original Movie, even if the dad bothers me. And he really bothers me. Why can’t you let your kids pick up hobbies and extracurricular activities of their choosing? He actually tells Heidi, “Your future’s in sports. It’s not some school play.” Perhaps the worst part: the family has to move to their new school district, and dad doesn’t find a place soon enough. A team member rats them out, so the Burges end up leaving their home for a sad apartment. All for sports!

The aforementioned teammate is Nicky Williams, who is intensely jealous of Heather. We see that Nicky is the way she is because her dad is never around. Eventually, she and the twins are able to be friends.

The whole team travels to New York City for a tournament over Christmas break. So this is where I can’t help but mention that Double Teamed can be a holiday movie, too, if you want it to be. Nothing like New York at Christmas! Unfortunately, they lose the tournament, but Heather gets an MVP award. I feel so sad for Heidi as she stands outside a theatre with no time to see a show before the flight home. Back in California, the Burges take Nicky home with them so she won’t have to spend the rest of the holidays alone. Rewatch the scene where they all practice basketball with the cutest boy in school. You won’t regret it.

One of the saddest parts is towards the end, when Heather twists her ankle from over-practicing. Her dad really feels like a jerk when Heather apologizes to him profusely for her injury. Heather’s mom reminds her to play basketball because she loves it, and not for other reasons.

But during the last school game of the movie, Nicky is injured and can only use one arm to play. So in Heather’s heroic moment, she suits up, limps out onto the court, and passes the ball to Heidi. Heidi makes the final shot and secures the win with seconds to spare. Probably wouldn’t happen in real life, but that’s okay. 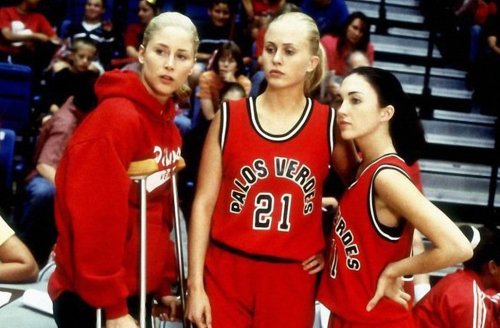 The final few moments of the film show an adult Heather and Heidi playing against each other in the WNBA. I wonder if Heidi wouldn’t rather be in drama club, but that’s still a good ending. This is the best sports DCOM of all time, in my book. But note: Disney+ has deprived us of the excellent musical bookends: both the opening song and the final one are different from what you saw many moons ago on Disney Channel. Did you notice? Alas, I’ll just have to buy a hard copy.

Two decades later, I love this movie as much as I did when I was a kid. There’s nothing like a good sister story, especially when such happy memories are attached. If you were watching Disney Channel during this time, you might remember the behind-the-scenes interstitials and promos for Double Teamed. It was so neat to see how they made the two leads look more like twins, and to learn a little about the real Heather and Heidi Burge. For all the basketball DCOMs out there, I’ll always be partial to this one. A heartfelt piece of 2002, and a snapshot of the 1980s, that I carry with me… pure nostalgia.