#1 of my 2022 Disney Channel movie project. For more info on this endeavor, click here.

My first Disney Channel Premiere Film, my inaugural film of this project, is Black Arrow, a 1980s adaptation of an 1880s Robert Louis Stevenson novel (set during a 1400s historical event).

I find it fun to consider historical fiction movies that have, themselves, become retro by now. 1985’s view of Stevenson’s sword-fighting tale is an interesting prospect. However, I was a little nervous about this movie at first and unsure of what to expect. I was an English major once upon a time, and I love both literature and history, but I’m not exactly fresh on The War of the Roses. Thankfully, Disney Channel’s version of Black Arrow didn’t require me to to recall every detail about the Lancasters and the Yorks.

A note on finding this rare film: I went on my usual YouTube hunt and found the movie dubbed over in Ukrainian. Of course, I took a quick peek. The opening credits were enticing, particularly the deep, romantic colors and Stanley Myers’ high-stakes score. Only problem was, there weren’t any English subtitles available. I decided to order a secondhand VHS on eBay, but was delayed in setting up my new player. Back to the Internet/YouTube. Lo and behold, a blessed commenter below the Ukrainian dub had provided a link to an English audio version. It was all set!

Black Arrow was directed by John Hough and stars Oliver Reed as Sir Daniel Brackley, Fernando Rey as the Earl of Warwick, Benedict Taylor as Richard Shelton, Stephan Chase as Black Arrow, Donald Pleasance as Oates, and Georgia Slowe as Lady Joanna. End of opening credits, against a silky navy blue background, a red rose and a white rose, the scene is set: 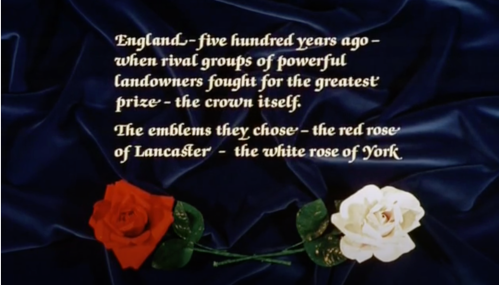 The details of the film come together pretty quickly. Sir Daniel Brackley (a Yorkist) has two wards: Richard Shelton (his nephew) and Lady Joanna. In Disney’s version, Sir Daniel previously sent Lady Joanna to live in a convent, but he has summoned her back so that he can marry her and steal her inheritance. In the book (per a synopsis), Sir Daniel actually disguises Lady Joanna as a boy and intends to have her marry his other ward/nephew, Richard. It’s true in either case that Joanna and Richard end up together, but it seems that there’s more of a love story in the book.

In the film, Joanna overhears Sir Daniel telling his frenemy, the Earl of Warwick, about his evil plan to marry her and acquire her riches. That is the moment when she brilliantly dons Richard’s clothes while he’s in the bath, then flees from her loathsome oppressor Sir Daniel. She’s headed home toward Lancaster. Of course, Richard is sent off to fetch her, he gets skewered by one of Sir Daniel’s minions, and the minions falsely believe that Richard is dead in a ravine. But alas, such a fate would only increase Sir Daniel’s wealth, to have one ward dead and one as his wife. Oates is a double-agent for Sir Daniel and the Earl of Warwick, and he meddles in the grand wedding once Joanna is recaptured, as he tells the Earl all about how Sir Daniel’s riches would increase.

We learn that the curious Black Arrow character is Lady Joanna’s father. He and Richard are in alliance by the end of the film. Sir Daniel tells Joanna that she must either marry him or face execution. She is briefly reunited with her father, whom Sir Daniel’s men imprison, but in a lucky plot twist, the Earl of Warwick sees to it that Black Arrow and company are freed so that they can disrupt the wedding and kill Sir Daniel. Happily ever after for Richard and Joanna. The lovebirds didn’t have much time to get to know one another, but she did tell him on horseback in the forest (about Sir Daniel): “Listen. If he marries me and kills you, all we both own will be his.” Not anymore. All’s well that ends well, I suppose!