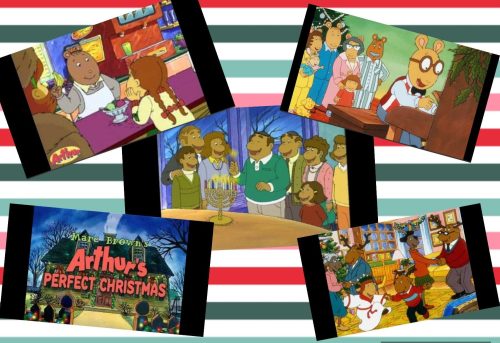 Arthur’s Perfect Christmas turned 20 in 2020, and it’s still one of the best Christmas specials of all time. I was in the first grade when it premiered in 2000 (my sister was a baby!), and I loved every minute of it. We had the VHS tape in a signature plastic clamshell box. We also had the soundtrack on CD so that we could listen to it in the car all the time.

A couple years ago, I came across the movie on DVD and thought it wise to purchase the film for myself. After a couple of moves for school/work, I finally opened that DVD and watched the movie with my husband yesterday. For the first time in many years, I took in Christmas with Arthur and friends–but not just Christmas!

Elwood City is full of diverse characters. First of all, every single one is an animal. To name some of the main players, Arthur Read and his family are aardvarks, and best friend Buster is a bunny rabbit. Francine Frensky and Muffy Crosswire are monkeys, the Brain is a bear (I think), Sue Ellen is a cat, Prunella is a rat like Mr. Ratburn (interesting), George is a moose, and Fern and Binky are dogs (Binky is a bulldog, specifically).

Arthur’s Perfect Christmas gives its characters additional dimensions for the holiday season, particularly when it comes to religion and culture. Starting with the protagonist, Arthur is Christian in a cultural sense, at least. He and his family celebrate Christmas every year, and his dad (a chef) even plans out a meal to emulate what people would have eaten in Bethlehem during Jesus’ day. Muffy and the Crosswires also celebrate Christmas, but Muffy doesn’t seem too aware of why…more on that in a minute. Binky is seen at the same church Arthur and his family attend on Christmas Eve.

George is the happy moose who celebrates St. Lucia’s Day, a Scandinavian tradition honoring the holiday’s eponymous martyr. St. Lucia is remembered annually on December 13, and according to Encyclopedia Britannica, the eldest daughter of every household dresses in all white and wears a lighted wreath on her head to act as Lucia, passing out food to guests.

The Brain and his family are African-American, and they are seen celebrating Kwanzaa. Earlier in the story, the Brain counsels Buster, whose mother is having a hard time with the holidays. The Brain and Arthur both think that Buster should just invent a new holiday for him and his mom. The Brain explains that Kwanzaa was invented by Dr. Maulana Karenga in 1966. I don’t mean to liken Kwanzaa to Buster’s “Baxter Day,” but this is how the Brain tries to help Buster in the special.

Francine and her family are Jewish, which brings us back to Muffy and continues our discussion of the Brain. Earlier in the program, Muffy is bugging Francine about coming to her Christmas party. Francine clearly explains that she cannot attend Muffy’s party because it conflicts with Hanukkah. Muffy rudely asserts that Hanukkah is not as important as Christmas. Francine strongly replies to the rude comment, “Well, it is to me!”

Two images dichotomize Jewish and Christian holiday traditions. Francine and her family are playing with their dreidl and enjoying their favorite Hanukkah foods. Muffy opens 37 Christmas presents and sings a song about how she misses Francine–ironically, the fantasy involves Francine shoveling coal on a train while Muffy sits in the caboose wearing a princess outfit.

Enter the Brain. Muffy and family stop by the ice cream shop where Brain once again offers his words of wisdom. Muffy is visibly upset, and a conversation with the Brain helps her understand why Francine would be hurt. The Brain scoops out ice cream in the colors of Kwanzaa, and Muffy wonders why he isn’t home on a holiday. The Brain explains that Kwanzaa doesn’t start until the following day, and he doesn’t celebrate Christmas. Muffy starts to ponder her rift with Francine, which eventually leads her to the Frensky home. Francine shows Muffy why Hanukkah is so meaningful to her, and the two reconcile and go on a joint family trip to the movies.

As a child, I loved seeing how all my favorite characters celebrated the holidays. What they celebrated, what they sang, what they ate, and why. Arthur is only one story in a rich chapter full of experiences and lessons. But what is his lesson? Well, it’s one that I can relate to quite well. Arthur is a perfectionist. He has a specific vision in his mind of what Christmas should be. Anything that messes with that vision leaves Arthur so frustrated and downtrodden. He dislikes D.W.’s handiwork on what is supposed to be a classic silver and gold tree. He has some tough luck with gift-giving, too. All he can find for his dad is an olive de-pitter (but Mr. Read loves it). The glass bird he buys his mom is just like the one he and D.W. once broke. Unfortunately, the second bird breaks, too. Arthur’s Uncle Fred comes to the rescue and passes his gift to Mrs. Read off as Arthur’s special gift to her.

And D.W.? She wants one annoying stuffed animal, but her mom can’t find it, so D.W. gets a different annoying but cute stuffed animal named Quackers. Baby Kate, Pal the dog, Grandma Thora and Grandpa Dave are all in attendance to round out the gathering.

That’s a lot to pack into an hour special, and I think PBS did a great job. I believe that everyone can see themselves in one of these characters. Twenty years ago, this series offered a phenomenal holiday event with a diverse story that was ahead of its time.

If you’ve never seen Arthur’s Perfect Christmas, I highly recommend it. All the holiday music is better when experienced firsthand (like “Baxter Day” or “Have a Boogie Woogie Christmas”), and the heartwarming scenes will stay with you for years to come. It’s worth the online rental fee (or DVD purchase, if you find one). Happy holidays!